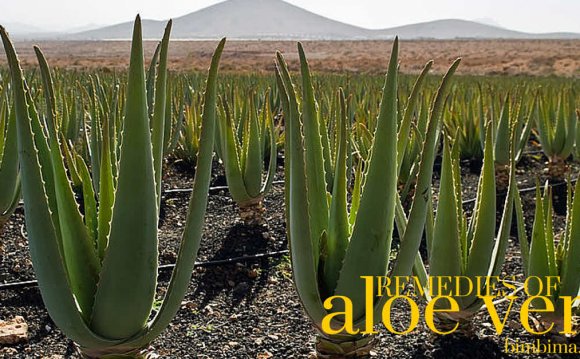 Aloe vera has been one of the most important plants used in folk medicine. The Egyptians referred to aloe as the "plant of immortality" and included it among the funerary gifts buried with the pharaohs. The healing benefits of aloe were recognized in the ancient Indian, Chinese, Greek, and Roman civilizations. It is traditionally used to heal wounds, relieve itching and swelling, and is known for its anti-inflammatory and antibacterial properties.

Aloe Vera, or Ghrita Kumari in Sanskrit, is a member of the lily family and is very cactus-like in its characteristics. It is one to two feet tall; and its leaves are succulent, broad at the base and pointed at the tips, with spines along the edges. These fat leaves contain the clear healing gel that is 96% water. The other four percent contains 75 known substances including Vitamins A, B, C, E, calcium, amino acids for protein building, and enzymes used in the digestive system.

There are over 240 species of aloe, however only 3 or 4 of them have medicinal properties; the most potent one is Aloe Vera Barbadenis. Native to North Africa and Spain, this plant now also grows in the hot dry regions of Asia, Europe and America.

The healing effect of aloe results from its ability to prevent injury to epithelial tissues, and promote healing of injured tissues. An epithelium is a layer of cells that covers the body. Our largest epithelium is the skin and one of the main applications of aloe vera is to soothe a variety of skin ailments such as mild cuts, insect stings, bruises, poison ivy and eczema. It also has antibacterial and antifungal qualities, and increases blood flow to wounded areas. In addition, aloe vera stimulates fibroblasts, the skin cells responsible for wound healing and the manufacture of collagen, the protein that controls the aging process of the skin and wrinkling. The skin absorbs aloe vera up to four times faster than water; it appears to help the pores of the skin open and receive the moisture and nutrients of the plant.

Due to its soothing and cooling qualities, Maharishi Ayurveda recommends aloe vera for a number of skin conditions:

In addition to the skin, other epitheliums in our body include the lining of the gut, the bronchial tubes and the genital tract, which also benefit from the healing effect of aloe vera. When taken internally, aloe vera juice aids the digestion and absorption of nutrients, helps control blood sugar, increases energy production, promotes cardiovascular health, improves liver function, and boosts the immune system.