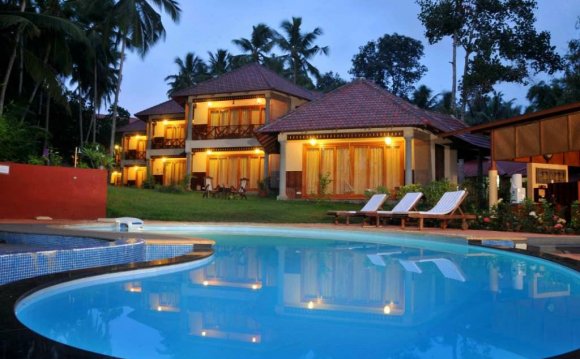 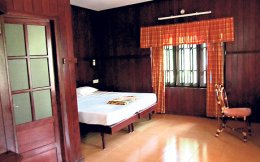 Then the doctor sets about balancing the person’s dosha, or doshas, with panchakarma, a detoxification process that works methodically through every imaginable nook and cranny of your physical self, and by extension – according to ayurveda – your unavoidably entwined emotional self, too.

So a two-week panchakarma – strictly speaking it should be three weeks, but this is the shortest they will do – is what I am embarked upon now. The doctor tells me that the most intensive detoxification period is the first four days, when between 60 and 70 per cent of the toxins will leave my body, and as a result most people find this the hardest part of the cleanse.

Feeling exhausted is the norm, apparently, with other symptoms that include nausea, migraines, joint pain and an upset stomach. I steel myself for the worst.

The morning glass of medicated ghee is followed by a lunch of rice gruel and steamed vegetables. (When I complain to a French guest about the weary-looking vegetables, she appears bemused: “But they are English style, non?”) In the evening you choose from the normal ayurveda-approved menu, which means vegetarian food only. Thankfully, south Indian vegetarian food is some of the best in the world and there is a wonderful array of dishes, from delicate pulissery (pineapple and coconut in curd) to punchy onion thiyal (flavoured with roasted coconut, coriander seeds, chilli and turmeric), to their signature thoran (a delicious dry dish of finely chopped vegetables mixed with grated coconut and curry leaves, then lightly fried).

After the first four days, you eat similarly well at breakfast and lunch, unless you are on the weight-loss programme, in which case there are ongoing restrictions. (The doctor has been known to chase after people on his bicycle if he hears that they are planning to eat dinner away from the ayurvedashram.)

The rooms at Shinshiva ayurvedic resort are simply decorated (Getty/Alamy)

I had been dreading those first few long, slow, hungry days, but in fact the hours you spend in treatment make the time pass surprisingly quickly.

The treatments are fantastic, some of the best I have ever had. Each guest is allocated one main therapist for their stay – mine is named Geetha – and three secondary therapists. Every day Geetha gives me an abhyanga massage, a fairly conventional treatment done with the hands but using bespoke oil. (My oil is yellow, which means that my fingernails start to look like those of a 60-a-day smoker.) And then there are a variety of other treatments, from a fantastically strong foot massage (during which I lie spread-eagled and yellow on the floor like one of the less glamorous corpses in Goldfinger, as Geetha hangs off a rope above me) to the sublime shirodhara, when a smooth flow of oil is poured on to your forehead to calm the mind. Ahhhhh. 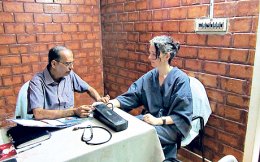 Even more wonderful is pizhichil, in which two therapists perform a massage as pas de deux, pouring oil in stereo along your limbs, arm and arm, leg and leg. Heaven. In all these massages the combination of the oil, and the action on the skin – and tissues, joints, fat and muscle beneath it – is designed to aid the release of toxins generally, and address particular physical and emotional issues or tendencies.

It is not just about the massage, however. There are a number of other treatments designed to leave no, er, orifice uncleansed. A tiny amount of medicated oil is poured down your nasal passages, so that it drips into your throat, for example. How strange, how unnecessary, you think, until you remember that you have been breathing polluted air for decades, and that those poor benighted nasal passages have never had a clean-out before.

You have medicated smoke put into your ears, eye drops in your eyes, and then there are the three enemas – two of medicated oil, one of herb-infused milk – though perhaps the less said about those the better. After each treatment is finished, you stay covered in the oil for an hour, dressed in an Obi-Wan Kenobi robe, until one of the secondary therapists comes to your room to bathe you, using not soap but traditional green gram powder. (Those not comfortable in their own nakedness will not do well here.)

By the end of day three I am feeling incredibly relaxed and also, it has to be said, incredibly smug. Aside from the prerequisite tiredness (which doesn’t seem any greater than normal jet lag) and a dull ache in my left hip joint (that I have never experienced before or since), I am symptom-free. No doubt, I therefore deserve the fact that, on day four, I end up taking at least 10 trips to the loo. Even so, I still feel as if I have got off pretty lightly. What is also putting a spring in my step are the incredible stories from the fellow guests. Most are repeat visitors, and they come from all over the world, from Switzerland to South Africa, from Russia to Rwanda. They all say that for at least a couple of years after a stay here you just don’t get ill – no stomach bugs, no flu, no aches and pains.

But it is more remarkable than that. There is the Russian woman who used to suffer debilitating migraines but hasn’t had a single attack since she first came two years ago. There is the French woman who received hospital treatment for unidentified chronic pain and was unable to walk. When she first visited, she thought she might die here; now she is back, full of beans, with her husband and daughter. There is the Rwandan woman with her mother, who is in her 80s: they first came four years ago after the elderly woman had suffered two strokes in quick succession and was in a wheelchair. When they left two weeks later, the wheelchair was no longer needed, and still isn’t.

Mine is not such a dramatic story, but as the days of sunshine, and oil and more oil drift by and then merge into one, my skin clears, my eyes brighten, and I feel and look my very best.

Shinshiva is a simple place, with few mod cons, and nowhere to swim (swimming is not allowed during panchakarma), but sitting on my balcony looking out over the long, sandy Keralan beach in the distance, I decide it is a particularly well-lubricated brand of heaven on Earth.

The nearest international airport is Trivandrum, and the easiest flight option from Britain is with Emirates from London via Dubai. Prices start at about £450 return, and the flight times are just under seven hours (to Dubai) and just over four hours (to Trivandrum); it is usually possible to find a good transit time in Dubai of between 90 minutes and two hours (emirates.com). The Shinshiva prices (below) include transfers from the airport to the ayurvedashram (about 30 minutes).